Edited by Saliha Paker and Mel Kenne, What Have You Carried Over? Poems of 42 Days and Other Works is a collection of poet Gülten Akın‘s works, translated by members of the Cunda Workshop for Translators of Turkish Literature.

Gülten Akın’s work spans sixty years of often turbulent change in the society and politics of her country, marked dramatically by three military coups in 1960, 1971, 1980. It reflects both the frustrating conflicts and the quiet moments of her private life as a wife and mother of five, but also her unwaivering commitment towards upholding social conscience as a universal value against injustice and inequality. Her deeply ingrained Sufi beliefs surface too, especially in her later poems. In this selection of Gülten Akın’s work, the first to be published in English, the reader will find translations that represent only some of the poems in twelve of her major collections. ‘Poems of 42 Days’ is translated in its entirety and holds a central place in this volume, as it does in her Turkish corpus of poetry. 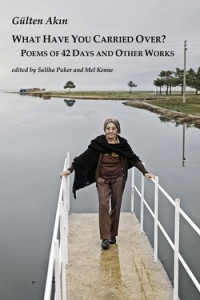