Birgül Oğuz was among the winners of the 2014 European Union Prize for Literature for her latest novel-in-stories HAH, now being translated into fourteen languages.

Published by World Editions in 2016, the English language version of HAH is a collaboration among nine literary translators and the author that began at the 2014 Cunda International Workshop for Translators of Turkish Literature. Kenneth Dakan coordinated the translation.

HAH traces the spiritual journey of a young woman mourning the loss of her father and his ideals. Compact, relentlessly creative, crackling like storms, each story is a powerful meditation on the act of mourning, conjuring up arresting imagery, striking dramatically different moods—anger, love, frustration, whimsy, tenderness and longing. It is a magical book about the life-changing revelations that happen to us when we grieve, a celebration of both life and death.

Description from the European Union Prize for Literature:

The eight and a half stories in Hah, a collection that reads like a novel, contemplate the psychology of mourning and melancholia, and the politics of mourning in particular. Hah, in search of a new literary agency to transform traumatic loss into meaningful narrative, seeks to answer these questions: how can one mourn when mourning is impossible? How can one write about mourning when it is impossible to find the means to narrate it? And how can one not write when writing is the only way to mourn?

In Hah, the intervention of time into mourning manifests itself as the intervention of mourning into language. Hah searches, finds, tries, uses and disposes of many types of literary devices in order to articulate the Loss (that is, ‘loss’ with a capital ‘L’) which defies articulation. It is a text that signifies the literariness of every discourse, politics included.

Highly intertextual, Hah draws upon a plethora of texts, from the Old Testament to 20th century European poetry, from 16th century ghazals to contemporary Turkish verse, from cornerstones of Turkish literature such as Leyla Erbil, Oğuz Atay, and Bilge Karasu, to the likes of James Joyce and William Shakespeare, from workers’ anthems to folk songs. It is a work that – while a product of a specific time and place – resonates with anyone who has ever experienced loss. Therein lies its particular universality. 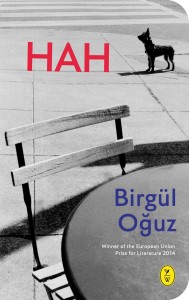