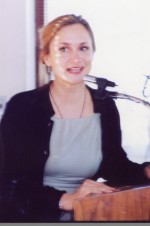 Elizabeth Pallitto received the PhD in Comparative Literature with distinction from the Graduate Center of City University of New York. She also holds an M.A.in Creative Writing/English from New York University. Her poetry collection “That Other Garden” was awarded First Place by the Academy of American Poets.

Versed in French and Italian, Elizabeth has translated Italian poets from the 16th to the 21st centuries. Recently, she has co-translated Turkish poetry in Aeolian Visions and published individual translations in Fox Chase Review. Her poems and translations have appeared in The North American Review, Hybrido Cultural Project, Forum Italicum, The Journal of Italian Translation, and Absinthe; her scholarly work, in Renaissance Quarterly, Comitatus, and Philosophical Forum. Her first book is Sweet Fire: Tullia d’Aragona’s Poetry of Dialogue and Selected Prose, the first English version of this woman poet’s 1547 Rime.

Inexorable Light, a book of Elizabeth’s poetry, will be published in the new year by Epos International (Rome). Also forthcoming from Epos is an anthology of writing by members of her writers’ group, tentatively titled Leaves of Autumn.

From 2004-2010, Dr. Pallitto taught in Istanbul, Turkey at Fatih, Kadir Has, and Bosphorus Universities. She now teaches writing and literature at Bloomfield College. She lives in New Jersey with Bryan Gardner, Mopso, & Thalia Buttons, her comic muses. Buttons is featured in her own poem.