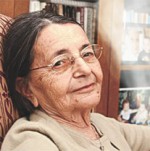 Gülten Akın, born in 1933, is one of the most influential Turkish poets in contemporary literature. After studying law, she first worked as a solicitor and a teacher, then became a literary critic and essayist, whilst at the same time leading the human rights organisation that she herself founded.

In her poems she addresses, from a woman’s point of view, themes that within a traditional, patriarchal society are dictated and controlled by men. Her poetry poses questions about equality, rights and love, and speak to those who have been less fortunate in life. Gülten Akin writes about those who can’t find their place in society and who are shut out from any social, political and economic possibilities. She is at the forefront of poets for whom poetry is synonymous with social responsibility.

As well as numerous other prizes, Gülten Akin won the 1961 and 1971 Turkish Language Association Award for Poetry and in 1992 the Sedat Simavi Literature Award.