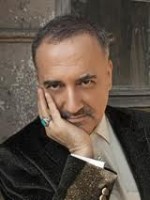 Murathan Mungan is one of the most prominent and prolific contemporary writers of Turkey. Mungan has published poetry, short stories, plays, novels, screenplays, radio plays, essays, film and theater criticism, and political columns. A selection of his poems was translated and published in Kurdish as Li Rojhilatê Dilê Min. His works have been translated into Bosnian, Bulgarian, Dutch, English, Finnish, French, German, Greek, Italian, Norwegian, Persian and Swedish. Mungan’s play Mesopotamian Trilogy, Geyikler Lanetler (1992) was staged by the Arca Azzura Theater in Italy. His play As on the Page was published in Solum and other plays from Turkey (Seagull Books, 2011), and his novella Evening Gown is forthcoming from City Lights.