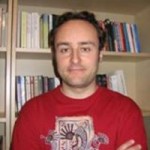 Petr Kucera (1978) holds an M.A. in Turkish and Islamic studies and a Ph.D. in non-Western literatures from Charles University in Prague. He held long-term graduate scholarships at the universities in Berlin, Ankara, Istanbul and Princeton. He currently teaches Turkish and Turkish literature at Charles University and continues to pursue research into Turkish literature from the late-Ottoman and early Republican eras. His translation of Orhan Pamuk’s novel My Name is Red into Czech was awarded the prestigious 2008 Magnesia Litera award for the best literary translation of the year.