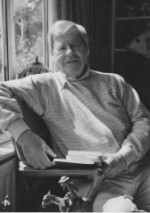 Ronald Tamplin was born in London in 1935, educated at Sir George Monoux Grammar School, Walthamstow and at Merton College, Oxford. He taught English Literature at various universities from 1961 to 2003: University of Auckland NZ ( 1961-1964), founder member of University of Waikato NZ (1964-1967), University of Exeter, UK (1967-1990). After retiring at Exeter to devote more time to writing, he held Visiting Professorships at Université Rennes 2 Haute Bretagne (1991-93) and the University of Bilkent, Ankara, Turkey (1996-2003) and was Honorary University Fellow at the University of Exeter (2003-2006). His books include Wynkyn de Worde’s Gesta Romanorum, (Exeter UP, 1974), A Preface to TS Eliot, (Longman, 1988), Seamus Heaney, (Open UP, 1989), Rhythm and Rhyme, (Open UP, 1993), ed. The Arts: A History of Expression in the 20th Century, (Oxford UP, 1991) and Famous Love Letters:Messages of Intimacy and Passion (Readers’ Digest, 1995). These last two have been widely translated.  His academic articles have appeared in conference proceedings, as contributions to books, and in many journals. His poetry has appeared in many magazines mainly in the United Kingdom but also in Australia, Canada, France, Ireland, Italy, New Zealand, Turkey, and the USA, in anthologies, and in three collections, the most recent, Checkpoint (2010). He has won a number of prizes including the Eugene Lee Hamilton Sonnet Prize (1956), The City of Winchester John Keats Bi-Centennial Prize (1995), The Wells International Poetry Prize (2009) and prizes in the Poetry Society’s National Poetry Competition (1998) and in the Bridport Poetry Competition (2002). Among his published translations of poetry are sections of an ongoing modern verse version of the 14th Century Middle English poem Piers Plowman which have appeared in several anthologies, and, in collaboration, poems from a number of Turkish poets including Enis Batur, Ilhan Berk, and Edip Cansever, as well as occasional versions from Hungarian, Spanish and Italian. He has participated in the Cunda International Workshop for Translators of Turkish Literature most years since 2006. He is a trustee of The Charles Causley Trust. His writings on this major 20th Century English poet include an exhibition catalogue Charles Causley: A Tribute from the Artists (1987) and various articles, the most recent in ed, Michael Hanke, Through the Granite Kingdom (2011).