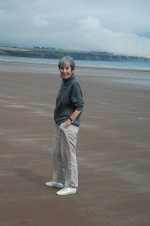 Ruth Christie was born and educated in Scotland, taking a degree in English Language and Literature at the University of St Andrews. She taught English for two years in Turkey and later studied Turkish language and literature at London University. For many years she taught English literature to American undergraduates resident in London. With Saliha Paker she translated a Turkish novel by Latife Tekin (Marion Boyars 1993) and in collaboration with Richard McKane a selection of the poems of Oktay Rifat (Rockingham Press 1993), and a major collection of Nâzim Hikmet’s poetry, again with Richard McKane, was published by Anvil Press in 2002. In the Temple of a Patient God, her translations from the Turkish of Bejan Matur, was published by Arc Visible Poets in 2004.

Recent translations include a major collection Poems of Oktay Rifat with Richard McKane (Anvil Press 2007) and The Shelter Stories by Feyyaz Kayacan Fergar (Rockingham Press 2007). In 2012 her translation of Bejan Matur’s How Abraham Betrayed Me (Arc Visible Poets) was awarded the Poetry Book Society’s Recommendation for 2012.