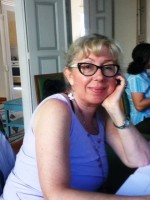 Selhan Savcıgil-Endres has taught at Hacettepe and Başkent universities and has written on various Turkish and American authors, including Toni Morrison, Orhan Pamuk and Paul Auster.  Selhan and Cliff  Endres live in Istanbul, where in 2000 they established the Department of American Literature and Culture at Kadir Has University. Their translations have appeared in a variety of  anthologies like  the  Anthology of Turkish Drama (2008) by Syracuse University Press  and journals including The Massachusetts Review, Quarterly West, Seneca Review, Talisman, and Translation Review. Their translations of the poet Enis Batur are published in Ash Divan: Selected Poems of Enis Batur (Talisman House, 2006) and their translations  of  two  novels  by Selçuk Altun, Many and Many a Year Ago (2009) and The Sultan of Byzantium (2012) were  published  by Telegram Books in London  and  New York.